On the Menu: Week of June 8 Here's what's on the Beard House calendar for next week:

Monday, June 9, 7:00 P.M
Louisiana Heirloom
Louisiana transplant Molly McCook of Ellerbe Fine Foods has earned national acclaim (including a spot on Bon Appétit’s list of 10 Best New Restaurants) for her gracious farmhouse cooking. At this dinner McCook will pay homage to her native state with an elegant, Gulf Coast–inspired menu prepared with heirloom and local ingredients.

Tuesday, June 10, 7:00 P.M
Town and Lowcountry
​An equal-opportunity dining city, Charleston has everything from authentic Lowcountry fare to avant-garde tasting menus. Nate Whiting’s acclaimed cooking encompasses it all, offering creative, Southern-rooted dishes that “take diners on a delicious romp through modern cuisine,” as per the Charleston City Paper.

Wednesday, June 11, 12:00 P.M
Beard on Books
A Travel + Leisure editor and great-nephew of esteemed American food writer M.F.K. Fisher, Luke Barr has delved into culinary history, combing through his great-aunt’s diaries and journals to write Provence 1970: M.F.K. Fisher, Julia Child, James Beard, and The Reinvention of American Taste. Recreating the time in which these three influential culinary icons gathered together to talk about food, culture, and their combined future, Barr compiles a riveting and dramatic account that still resonates in today's food-centric world.

Wednesday, June 11, 6:30 P.M
A Night of Film and Food
For the second year in a row, the James Beard Foundation Greens (foodies under 40) are partnering with the Film Society of Lincoln Center’s own under-40 group, New Wave, to present a fabulous evening of film and food at the organization’s Elinor Bunin Munroe Film Center.
Guests will enjoy a special screening of the acclaimed film Jiro Dreams of Sushi, followed by a reception featuring some of New York's finest chefs, sake, beer, and wine.

Wednesday, June 11, 6:30 P.M
Carla’s Hot Italian
Carla Pellegrino rose to renown as the chef at New York City’s storied, impenetrable Rao’s before going out on her own in Las Vegas. Now with the newly opened (and super-sexy) Touché, Pellegrino will be serving her lusty, flavorful Italian fare to eager Miami diners.

Thursday, June 12, 7:00 P.M
Michelin Star
Even if you make it out to the Bay Area this year, chances are you’d have to pull a few strings to get into the Michelin-starred, constantly evolving, 28-seat hot spot helmed by chef Teague Moriarty. Reserve your seat at the Beard House now for a taste of this team’s modern New American cuisine. 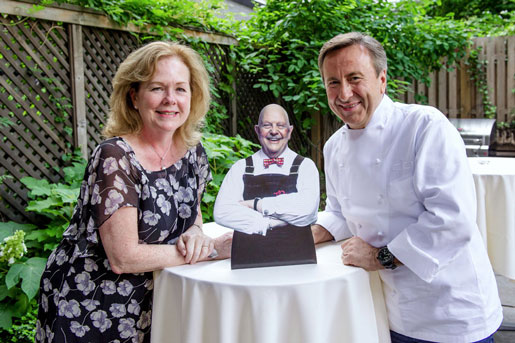 How the Restaurant Industry is Responding to COVID-19