Mix Masters: How Three ’90s Icons Cooked Up a Funky Fresh Blend of Food and Music 2 Chainz couldn’t make it to the listening party at the Bon Appétit kitchen—he was delayed by a nine-hour stand-off with police in Oklahoma. Disappointed fans would have to wait to hear the rapper’s latest album and peruse the accompanying cookbook, #MealTime, featuring his favorite tour bus recipes. Those who needed a little something to tide them over could turn to Action Bronson, the culinary school grad and former chef, who made his bones with rhymes like “I’m on the art and the food scene. F*** rap, laying back eatin’ poutine.”

You don’t have to be a hip-hop head to notice the worlds of music and food getting hot and heavy lately. You may have read in Saveur about rockers trading their studded leather for chef’s coats. Or perhaps you’ve enjoyed a lick of “cinnamon and lesbians,” a soft-serve collaboration between Christina Tosi of Momofuku Milk Bar and indie vet Stephen Malkmus. (Think of it as hipster Cherry Garcia.)

Truly, it’s a golden age for music-loving foodies and gluttonous record geeks. You can groove to Food, the new release from R&B star Kelis—featuring “Jerk Ribs” and “Cobbler”— then watch her bust out her Cordon Bleu training on the Cooking Channel. If you happened to be in Detroit on a recent Wednesday, you could have enjoyed “A Night with Kid A,” chef Kyle Hanley’s ten-course dinner inspired by the Radiohead classic. (“Idioteque” translates as “arugula salad, sous-vide egg, lardo croutons, manchego crisps, crispy pancetta, smoked sherry vinaigrette, Meyer lemon foam, caper dust.”)

How did all this cross-pollination get started? Country and R&B singers have waxed nostalgic about down-home staples for more than a century, but the vittles were rarely integral to an artist’s identity (Jimmy Dean being a notable outlier). Hank Williams may have performed “Jambalaya” with his Drifting Cowboys, but no one confuses him with the Galloping Gourmet. And in the psychedelic ’60s, food was incorporated into lyrics and band names without reference to cooking or eating. Does listening to the Strawberry Alarm Clock make you hungry? Didn’t think so.

The first frisson of a true musical-culinary fusion came decades later—in 1992, to be exact, when Sassy magazine, voice of the alternative nation, launched its “Eat This” recipe column. Contributors included Kim Gordon of Sonic Youth (tuna tacos smeared with butter!) and Beastie Boy Mike D (a carrot cake about which the Internet still hums—seriously, Google it). The idea that these paragons of zero-Kelvin cool ever thought about food, let alone made it with their own hands, was a revelation to a generation of Docs-rocking DIY-ers. “More than once we had to run corrections about the recipes because the measurements would be all off or an ingredient would be left out,” says Sassy’s founding editor, Jane Pratt. “But no readers ever got mad about that—it just made it all feel more genuine and punk rock.”

Whipping up a bite for a magazine is one thing. Devoting your entire debut album to matters comestible is a whole other kettle of congee. That’s what Cibo Matto (Italian for “food crazy”) did with Viva! La Woman in 1996. To be clear, songs like “Beef Jerky” and “White Pepper Ice Cream” aren’t about food in any literal sense. The admonition “You got to know your chicken” isn’t a farm-to-table rallying cry. Yet Miho Hatori and Yuka Honda, Japanese expats living in New York, were inspired by grub in ways Hank Williams never imagined.

“Food metaphors can be strangely interesting—we were getting off on that,” Hatori and Honda recounted via email. “If you’ve prepared artichokes, for example, you know the excitement of getting to the fuzzy inner part of it, you know how sometimes petals come off easily, how sometimes you have to rip them off hard. All these memories should serve you with the line ‘my heart is like an artichoke.’”

The band was broke when they made Viva! La Woman, so they hunted for cheap eats like momo jaja, a Malaysian mélange of tapioca, coconut milk, red beans, and taro. With its fizzy brew of loops and samples, pop and avant garde, explain Hatori and Honda, Viva! exemplified their musical momo jaja: “Simple ingredients cooked and mixed in a new, surprising way.”

What started as a few bubbles in the ’90s has come to a rolling boil. Reasonable to wonder, then, how much further we can go. Will chefs of the future commission original scores to accompany their tasting menus? Will up-and-coming bands hit the road in food trucks, winning over crowds with heritage pork tacos? How about Beats by Flay? Don’t be surprised. When it comes to the mash-up of sound and taste, there’s always room for more.

Daniel Browne has written about culture, animals, and the arts for Salon, The Oxford American, The Believer, and Mojo Magazine, among others. Find him on Tumblr.

A Fresh Take on a New England Favorite 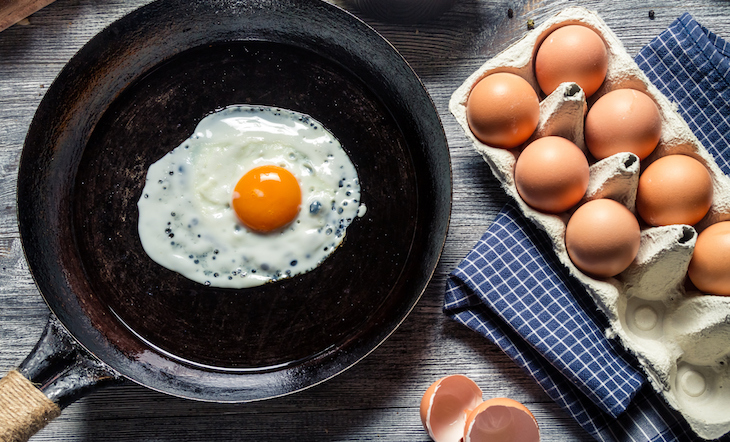