If you’re anything like us, the first thing you do when planning a trip—perhaps even before booking a plane ticket—is figure out where you’re going to eat while you’re there. Museums, sightseeing, and shopping are all well and good, but food is often the main attraction. To make trip planning a little easier, we’re compiling lists of our can’t-miss pit stops in some of our favorite places. Below, our executive vice president (and resident globe-trotting gourmand) Mitchell Davis shares his absolute must-eats in Japan for this special international installment.

America’s culinary world is having a Japan moment. Again.

While the food media tries feverishly to find the next node of culinary innovation, the attention of chefs and food-focused entrepreneurs has returned to Japan, as it almost always does.

I, for one, go there for inspiration. Tokyo is home to more restaurants than any other city on earth. The bustling food halls beneath Japanese department stores make New York City’s recent collaborations look quaint. And even the trends we think we own the rights to—Cronuts®, farm-to-table fare, even “Brooklyn”—are amplified and expanded in the land of the rising sun.

What’s more, similar to the way Japanese chains are invading our shores (see Elise Inamine’s recent Tasting Table roundup), now American brands are everywhere in Tokyo. There’s Dominque Ansel’s gleaming multiplex in Omontesando and outposts of New York City comfort-food favorites Bubby’s and Clinton St. Baking Company around town. (No wonder pancakes and pie are the rage, though for an afternoon snack rather than breakfast or dessert). You also see Brooklyn Beer on tap, and lines at Shake Shack.

Although Kyoto is considered the culinary heart of the country as the birthplace of the tea ceremony that begat kaiseki cuisine, and JBF Award–winning author Matt Goulding makes a good case for the gastro-centrality of Osaka in his beautiful new book Rice, Noodle, Fish, it’s Tokyo that excites me and my palate most. Maybe it’s because I live in New York and the confluence of cosmopolitan culture, design, fashion, and business feels like home.

On a recent trip, I ventured out of the center of the city for the first time to the surrounding prefectures—which will host much of the 2020 Olympics—and there were many rewards nearby. In less than an hour you can find yourself strolling the streets of an old-fashioned town wearing a kimono, riding an antique train through a mountain valley, or wandering the grounds of a historic temple, between meals, of course.

A favorable exchange rate makes now a good time to dine your way around Tokyo and beyond without the fear of rent-sized bills when you request an omakase (“chef’s choice”) menu. For value (in U.S. dollars) and variety, there’s no place I’d rather eat.

In the category of “cooking your food in simmering liquid in the center of your table” traditional Japanese dining usually affords two options: shabu shabu and nabe (“hot pot”). Kinstuta is something different. A parade of beautiful appetizers begins the omakase meal. Then a flame is lit under a pot of rich broth and a large doughnut-shaped tray arrives with mountains of finely shaved negi (Japanese spring onions) that are draped with thin slices of heavily marbled beef and/or pork arrives. You knock the meat and the onions into the broth to cook and then lift them from the liquid into bowls of dipping sauce. It’s fun and delicious. At the end, after all of that fat and onion flavor has melted into the broth, fresh cut noodles are added and the whole thing is ladled into bowls. Writing this makes me salivate. (An added bonus for Western travelers: the chef, Takayuki Moriyama, worked at New York City's Kyoya and speaks some English.) In general, in America, we think of fried food as low-class, which is not to knock fried chicken or jalapeño poppers. In Japan, it’s an (pricey) art form, the technique of frying having been brought to the region in the 17th century by Portuguese traders. (Truth be told, you can eat yummy fried food in Japan at every price point.) Tempura Motoyoshi is a Michelin-starred tempura temple. A counter with just eight seats flanks the master fryer while he works. The parade of crisp, battered gems that emerge from the hot oil—approaching 20 or more—includes seasonal specialties, such as ginko nuts and shirako (cod milt). It’s a transformative (and filling) experience.

It’s not hard to find people obsessed to the extreme with something, anything in Japan. There’s even a word for it, otaku. Gen Yamamoto, a barman who worked for several years in and around New York, has taken Tokyo’s already otaku cocktail culture up a notch at his eponymous bar. Drinks are only served as part of a four-course omakase tasting menu, built on seasonal fruits and vegetables and incorporating rare, artisanal alcohols and other ingredients, many bottled specially for him. He works alone. The experience is exhilarating, in quiet, meditative way, and the cocktails are delicious. The prefectures that surround Tokyo, Chiba and Saitama, are full of interesting sites and food that you would normally have to travel much farther to see. Consider a quick cab ride from Narita airport to the grand Naritasan Shinshoji temple or a day trip to the temples of Kamakura. There’s plenty to nosh on as you make your way around.

Are the crowds, the lights, and the commotion of Tokyo making you crazy? How would you like to be sitting near a river in the countryside around a large fire pit in an open-air restaurant gazing a verdant mountainside while you grill regional specialties for lunch? That’s what you can do in this uniquely situated restaurant in Chiba prefecture. (Think Asador Extabarri in Spanish Basque country, only here you do the work.) It’s simple, satisfying, and good for a crowd—if you can get them all here (which is possible by public transit from Tokyo Station, but easier by hired car). Only in Japan would anyone recommend going to a parking garage to eat. And one located smack dab in the middle of a body of water, at that. This isn’t any parking garage, of course. This is one of the most complicated and expensive feats of civil engineering in human history. The Umi-Hotaru parking island in the middle of Toyko Bay marks the point at which the tunnel under the bay rises up to become a bridge. Don’t make the mistake of just driving by. Stop, park, and eat. (You can even take a shuttle bus from Kawasaki Station.) There are several floors of good restaurants, as well as wonderful souvenirs. The special omiyage (souvenir) from the parking lot is a baumkuchen (ringed tree cake) glazed with special Japanese brown sugar that may be the best I’ve ever had (and the more time you spend in Japan the more baumkuchen you have).

It may seem like an oxymoron, but Wadou is a contemporary ryokan (traditional Japanese hotel) with lovely rooms, modern public spaces, and wonderful kaiseki cuisine. There is not much English spoken, but through gentle gestures and an occasional escort, you will find where you are going and figure out what you are supposed to do. The traditional Japanese breakfast in the morning is a highlight of the stay, as are the multiple dips in the rotoburu onsen (outdoor hot spring bath). What’s more, the futons are raised off the floor, a bonus my inflexible Western male legs appreciate.

Tokyo is full of restaurants that replicate (and, in some cases, improve) restaurants from other places; it’s not unusual to accidentally trip over a branch of a favorite French, Italian, or, increasingly, American restaurant. But in addition to these carbon copies, there are fusion experiences that sometimes grow into their own legitimate culinary forms (think Italian-American food and East-West cooking back home). Yoshoku is the word for East-West fusion in Japan and Ajiichiba Bettei is a wonderful expression of Franco-Japanese cuisine the likes of which you might have seen prepared on the original Iron Chef series. Impressive French technique, unique Japanese ingredients, and refined flavors with a decidedly French bent are hallmarks of the kitchen at this beautiful restaurant that regularly requires a six-month wait. Book early.

Want more travel inspiration? Check out the rest of our JBF Trip Planners. 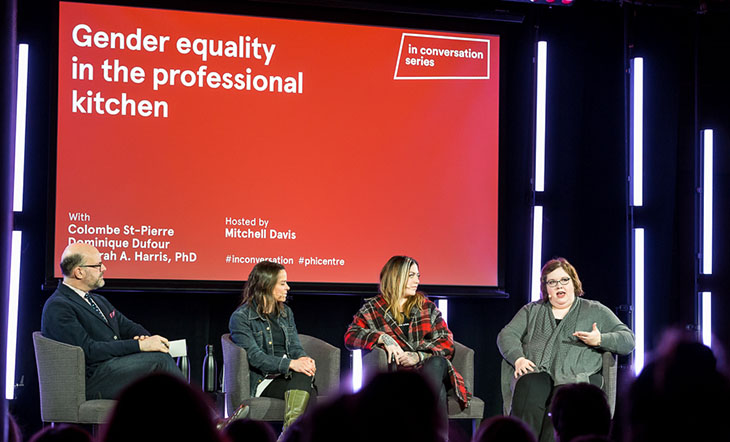 Out of the Fire