Kaysen, who grew up in Minneapolis and left for 16 years, working as a chef in San Diego and New York City, most recently and notably as the chef of Daniel Boulud’s Café Boulud, where Kaysen won the JBF Rising Star Chef award in 2008.

The award-winning chef’s return to his hometown to open the much lauded Spoon and Stable has brought a lot of attention to the city from the national food media, and as emcee Andrew Zimmern, also a local and national star of the Travel Channel’s Bizarre Foods and several other television shows, the area is well deserving of that spotlight.

“The biggest trends in food today are foods that any Minnesota grandmother would shrug her shoulders at,” Zimmern said as he took the stage. “The hottest thing in dessert today is pie. From scratch. There’s not a person in this room who can’t make a pie from scratch.”  Zimmern added that James Beard himself would have been thrilled with the national movement toward embracing culinary traditions and highlighting the producers of food. Guests at the dinner were treated to a tasting reception from local chefs, including a Foie Gras Hot Dog by host chef Timothy Fischer of the Loews Minneapolis Hotel; Pheasant–Chestnut Totellini en Sarvecchio Brodo by Thomas Boemer of Corner Table; Pumpkin Tartlet with Sage Gelée and Mustard Shoots from Lenny Russo of Heartland in St. Paul; Cured Duck Breast with Gooseberries, Wild Rice, Ginger, Espelette, and Gastrique from TJ Rawitzer of The Third Bird; and Preserved Artichoke Heart with Crispy Chicken Skin and Smoked Ham from Jim Christiansen of Heyday. After a first course of Harvest Salad with Local Apples, Roasted Squash, and Root Vegetables by Fischer, it was time for Kaysen’s course, Smoked Sturgeon Tartine with Celery Root, Caviar, and Pumpernickle. Back in the kitchen, the chefs were plating platters of Jonathan Waxman’s New York Strip Steak with Late Summer Vegetables, which was served family style at the tables. Dessert by Spoon and Stable’s Diane Yang was a Honey–Cream Cake with Fall Garnish, which Kaysen revealed is the most popular dessert at the restaurant. During dinner, guests listened to a live jazz band and horn playing by the Potash Twins.

The next morning, Kaysen was up bright and early to join us at Sur La Table, where he demonstrated how to make a fall squash risotto and told stories about how he got started his career at Subway, and once wrote to Daniel Boulud to ask if he could work for him for free (“Of course he said yes.”), and mentoring chefs to compete in the Bocuse d’Or through the program Ment’or. Kaysen also discussed his decision to move back to Minneapolis to be close to his family and create a better lifestyle for his young children.

The James Beard Foundation's Taste America tour is off to Boston and New Orleans next weekend. Future stops will be made in Chicago, San Francisco, and Los Angeles. Learn more about Taste America at jbftasteamerica.org and follow the tour at #JBFTasteAmerica on Twitter and Instagram. 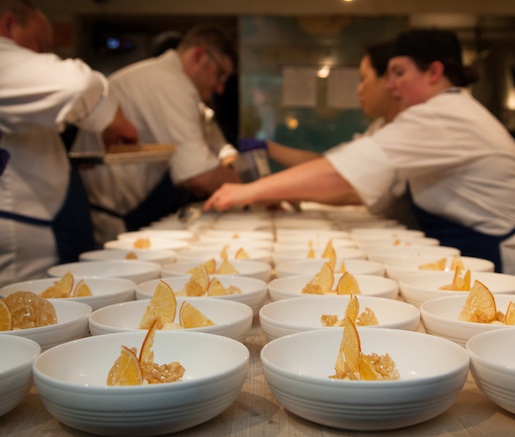 On the Menu: Week of April 6