Talking Sustainability and Scale in Charleston In preparation for our 2012 JBF Food Conference, A Crisis in Confidence: Creating a Better, More Sustainable Food World We Can Trust, we're holding regional salons around the country to discuss the concept of trust in our food system. Our conference season officially kicked off on April 10 in Charleston, South Carolina, where we met with a diverse group of 18 insightful chefs, farmers, restaurateurs, educators, and other members of the Charleston food community. The participants were asked to consider the notion of trust through a variety of lenses—science, scale, and place. Last week, we shared the feedback on the concept of place, and yesterday, we shared the group's insights on science. Next up, we’d like to share what everyone had to say about the context of scale as it relates to trust in our food system:

The critical issues we face as a community have raised a host of questions regarding the concept of scale: with an increased focus on local production, what does size really mean in relation to sustainability? Is smaller always better? And does the notion of “scale” resonate in any other contexts? There was a unanimous conclusion that, via quantity, scale affects the quality of the food we produce. “In this country, we have the smallest percentage of income devoted to food, and the largest percentage goes to healthcare,” said one farmer. “We're not feeding people right. There's got to be more TLC going into the crops, and in order to do that you've got to be smaller.” A local supplier agreed, saying: “The perception of food value in this country is outrageous. 17,000 new food items are introduced into the USA each year, usually in a bag or a box. And these products have the marketing to support them.”

The concept of marketing took the conversation in an interesting direction, shifting the implications of “scale” to translate into reach and access, rather than just size. According to another farmer, “The question is really: how we can go from apathy to trust? In order to achieve real change, we have to reach the masses and make them trust us that there's actually a crisis happening.” An educator agreed, saying: “Trust and value are inextricably linked, and we need to perceive value to be willing to pay more. We've constructed, as our right, that our food be cheap and plentiful.”

Our participants had a range of ideas for addressing scale in the context of reaching the community—and marketing remained a consistent theme. According to one participant, “The way to get people interested has to do with marketing; it will trickle down. Like the status symbol of owning a Mercedes-Benz, we need to introduce the idea that you've achieved success if you're only eating local and organic food.” Another participant agreed, saying: “People are always willing to pay for what they want, but never what they need. If we could shift this over to the category of what we want, we might have a greater success rate.” And finally, one participant suggested an idea that tied together the concepts of scale in terms of both size and access: “It's time to think outside the box. Instead of building air-conditioned mega-stores, we should be setting up more kiosks in food deserts with fresh, healthy food choices that can be purchased with food stamps.”

If our Charleston salon is any indication, we'll have a lot to discuss at our conference in October. We’ll continue to report on our regional salons as they occur, so stay tuned!

Our upcoming JBF Food Conference and Leadership Awards will take place on October 17 and 18, 2012 at the Hearst Tower in New York City. To receive updates and registration information, please send us a note at: foodconference@jamesbeard.org.

The photo above shows some of the local, seasonal produce available on JBF Award Winner Sean Brock's menu at McCrady's. These ingredients change daily. 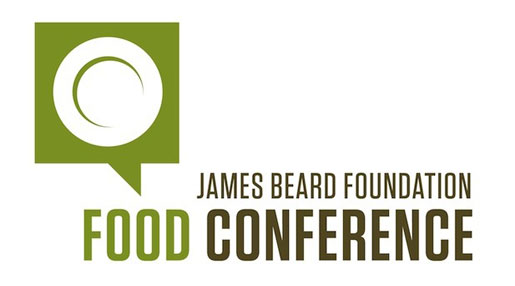 Announcing Our 2015 JBF Food Conference: Rethinking the Future of Food