This organization is providing fresh food to Philadelphians

The COVID-19 pandemic has been devastating for the restaurant industry, permanently shuttering 17 percent of restaurants nationwide, and revealing inequities and vulnerabilities baked into the foundations of these businesses. But there is hope on the horizon, as vaccines roll out and more food professionals are immunized. At the James Beard Foundation, we’re looking forward with optimism, while also striving to provide resources and tools to help the industry recover and rebuild with equity and sustainability at its heart.

Below, Sarah Maiellano follows the story of West Philly Bunny Hop and how the mutual aid organization is serving their community through food.

West Philly Bunny Hop starts out like a story we’ve all heard: friends Jena Harris and Katie Briggs each started working in restaurants as teenagers. They moved through the ranks and throughout the country to follow their culinary passions. If you’re expecting to hear that their next step was partnering up to open the hottest new restaurant in town, here’s where the story pivots.

In the early days of the COVID-19 pandemic, Harris and Briggs took their food system know-how and built a free food distribution network that rapidly grew to serve 3,000 Philadelphians a week. Their organization, West Philly Bunny Hop , is one of many mutual aid groups that emerged throughout the country to address unmet needs over the last 18 months.

From Soup to Nuts: the Beginning of Bunny Hop

A few weeks into the pandemic shutdown, Briggs remembers “feeling so useless” while isolating at home. While commiserating with Harris, she suggested: “Let’s make a bunch of soup this weekend and bring it into the park.” They called their soup giveaway “West Philly Bunny Hop” since it was around the Easter holiday of April 2020. For their first event, they served about 100 people in their neighborhood.

The pandemic only worsened Philadelphia’s hunger crisis, which impacts an estimated one in five residents—and even more of the city’s children. Philadelphia stepped up its food distribution efforts, but according to Harris and Briggs, those government resources often lack fresh food. That’s where the friends found their niche.

With strong networks of food industry friends and resources, Harris and Briggs found themselves perfectly positioned to rescue and redistribute food. The duo had spent their whole careers preparing for this moment.

After college in Philadelphia, Briggs joined Outstanding In the Field—a traveling, pop-up dinner party that brings together chefs, growers, farmers, and food lovers. She visited 200 farms and worked with a variety of chefs, landscapes, and regional ingredients. Briggs then earned a James Beard Foundation Women in Culinary Leadership Grant and moved back to Pennsylvania in 2015 with the goal of bringing expertise about agriculture and local food systems home.

Harris made her way to Philadelphia after a decade working for Whole Foods stores around the country. She connected with chef-activist Cristina Martinez and joined the South Philly Barbacoa team. When Barbacoa moved to a new location, Harris and a partner took over the space for a year and created a shared kitchen called 1149 Cooperative. Today, that space houses Martinez’s mutual aid initiative, The People’s Kitchen.

Harris and Briggs met at a People’s Supper dinner in 2018 and started collaborating on food community events. They also “met a lot of the folks that are the foundation for what we’re doing with Bunny Hop,” Harris recalls.

When the pandemic started, Briggs was working at Share Food Program—a leader in the fight against food insecurity in Philadelphia. As businesses began to close and empty their walk-ins, she remembers “watch[ing] Philly’s food infrastructure crumble.” Harris is a manager at Riverwards Produce—a neighborhood grocer known for locally sourced products—where she’s well-positioned to repurpose excess food.

Leaping into Mutual Aid in 2020

After the early soup distributions, the friends realized that Bunny Hop had legs. They started collecting food and goods for free distribution in neighborhoods with under-resourced populations. Help came from all over: grocery stores, local farms, government and nonprofit programs, individual donors, and more. Distributions have ranged from fresh food passed out at local parks to home deliveries to prepared meals created by volunteer chefs.

By summer 2020, West Philly neighbors had been through more than their share of heartache. Unrest following the killing of George Floyd centered in the historically Black neighborhood. However, the community was able to use their pain to help others. Case in point: last summer Bunny Hop “saw a big spike in activity in people wanting to donate, volunteer,” Harris remembers.

“It was wild, my phone broke at some point,” she says. “It was a way to use energy they’d been conserving in their homes for months, to feel helpful and useful and involved.”

Bunny Hop was able to serve 3,000 people a week at its peak, a period of time when the collaborators had access to a commercial kitchen. Although the organization no longer has access to storage and a kitchen, Harris and Briggs have honed in on gathering fresh produce for quick distribution—something that’s always been at the heart of their mission.

“It’s nice to give people the first of things and not the last of things,” Harris says. “[Bunny Hop distributes] fresh produce because everyone deserves that.” Local farms make weekly donations of greens, herbs, citrus, and more, while monetary donations allow Bunny Hop to purchase fresh food from distributors and stores.

Today, neighbors manage on-site distributions in five neighborhoods. Bunny Hop is serving an estimated 125-150 people per week and remains free to all. Harris and Briggs, along with about 20 fellow volunteers and collaborators, focus on rescuing and buying food, plus fundraising through donations and grants.

What started out for Briggs as a “channel I could put anxiety and anger at the system for failing people,” has grown into a sustainable, replicable mutual aid model. “We want to keep sharing what we know, what we’ve learned,” Harris says. “You don’t have to work 100-hour weeks to do mutual aid; you might just drop stuff off in a community fridge.”

The duo recommends getting involved by donating funds, goods, or time—or simply, talk to your neighbor and see what they need. “Food is an easy way to bring people together and have common ground,” she adds.

“At a time when we were told to stay away from each other, [we’re] recognizing how we grow together and move through this time together,” Harris says. “We aren’t in this alone, we’re in it together, we’re going to get out of it together, but we need to be in community together, we can’t do it by ourselves.” 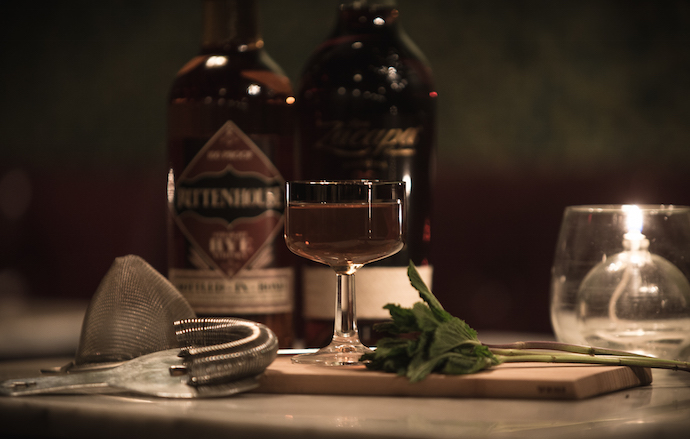