Neil Kleinberg made this delectable dessert to demonstrate the power of the egg at a Beard House workshop.

For the caramel sauce, combine the sugar, water, and lemon juice in a heavy saucepan. Bring to a boil, stirring to dissolve the sugar. When the sugar is dissolved, cover the pan and boil for 2 minutes. Uncover and cook to the caramel stage (golden brown and at the hard-crack point; between 300ºF and 310ºF on a candy thermometer). Toward the end of the cooking time, turn the heat to very low to avoid burning the sugar. It should be a golden color. Remove the sauce from the heat and let it cool for 5 minutes. Bring the heavy cream and milk to a boil. Add a few ounces to the caramel. Stir, continuing to add the cream slowly. Return to the heat and stir until all of the caramel is dissolved.

Butter a small, shallow roasting pan. Cut bananas in half lengthwise and sprinkle with cinnamon and vanilla. Roast at 350ºF until the bananas are golden-brown and soft. Purée bananas and add to the warm caramel sauce. Keep warm.

For the soufflé, butter a 2-quart soufflé dish or ten 1-cup soufflé dishes well, then coat with granulated sugar.

Work the flour and butter together to form a smooth paste. Dissolve 1/2 cup of the sugar in the milk and bring to a boil. Remove from the heat. With a wire whip, beat in the flour paste. Beat vigorously to make sure there are no lumps. Return the mixture to the heat and bring to a boil, beating constantly. Simmer for several minutes, until the mixture is very thick and no starchy taste remains. Transfer the mixture to a mixing bowl. Add the chocolate and stir until all of the chocolate is dissolved. Cover and let cool for 5 to 10 minutes. Quickly beat the yolks and vanilla into the milk mixture. Beat the egg whites until they form soft peaks. Gradually add the remaining sugar and beat until the mixture forms firm, moist peaks. Fold the egg whites into the soufflé base. Pour the mixture into the prepared baking dish(es) and smooth the top(s). Bake at 375ºF. Approximate baking time is 15 minutes for single-portion dishes and 30 to 40 minutes for a 2-quart soufflé dish. Dust tops with a touch of cocoa powder or confectioners’ sugar. Serve immediately with the caramel sauce. 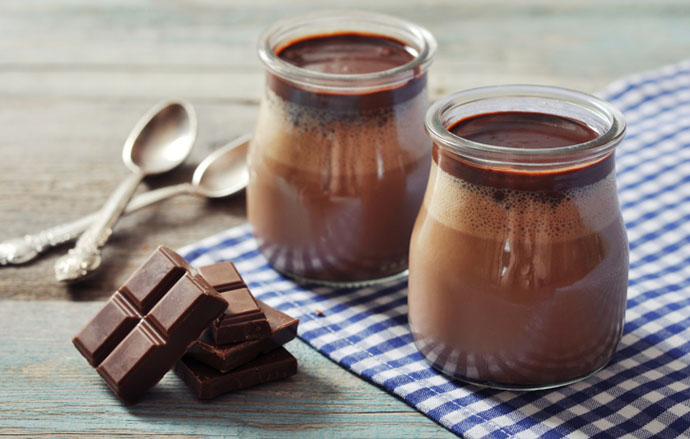